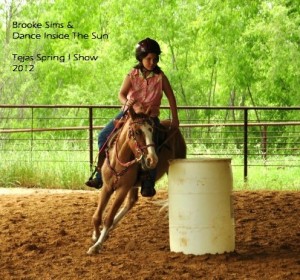 Hello my name is Brooke Sims and my Best Friends name is Dance Inside The Sun. This is our story.

Ever since I was little, I longed for the day when me and my family would have horses. As the days without horses grew longer, I started to think the possibility of me getting a horse was just a distant wish. Finally I got my first horse or so I thought, but it wqasn’t the right fit. I tried several horses that I chose, but sadly none chose me. After three years maybe even longer of trying to find a horse, I was near to giving up when we decided to try one last horse. We were at Karma Farms where Mrs. Vickie was showing us the new yearlings and 2 yr olds they just got, because the pony I had at the time was crazy and had ran off with me and reared up with Miss Vickie. As she and my mom were talking, I was rather glum and crying, because I was dang near positive that none of them would be the one.

A shining horse, the color of the sun, was about to change that thought. He came up to me while I had my back turned then he started licking my face, he even licked my tears away. Miss Vickie said, “Don’t let that colt bite you”, but I knew he wouldn’t because it was him, my favorite horse in the world. I had seen him before, but I figured that I couldn’t afford a horse as perfect as him even in wildest dreams. We stood there for a long time him licking my face and me giggling because it tickled. Miss Vickie told my mom that we should stop looking because this colt had just picked me and she saw the connection too. (It’s a good thing they saw it too, because I thought maybe I was hallucinating due to the fact he was my dream horse.) As my mom always says where there is a will there is a way. I was determined to have him as my own. A couple of months before I had done the local goat show and sold my goat for $500, but that wasn’t enough so I decided to spend my money. I went to the sale barn and got a couple of flashy colts for just at $300. Then I trained those horses on groundwork and sold one for $750 and another for $300. There were three good things that came from training those horses; 1. Horse Training Experience, 2.Learning Responsibility and How to Stretch My Money, 3. Last but certainly not least, I got to buy Dance Inside the Sun. 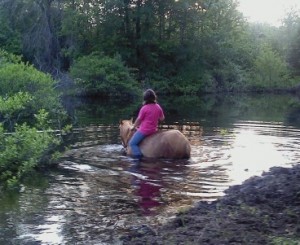 Soon after taking Dance Inside the Sun (who we call Sid or Sidney for short) home, we started week one of basic training. Day 1 he was home: I taught him how to walk and trot in hand. Day 2: I taught him to back up and lift each and every hoof. Day 3: we reviewed what we learned and he got rewarded with a whole day to graze. Day 4: we practiced walking and trotting over logs, creeks, and other things that he might one day come across. Day 5: I started teaching him to work on the lounge line (Walk, Trot, and Lope). Day 6: we finished part two of lounge line training (reverse, face, etc.). Day 7: final day of basic training we reviewed over everything, practiced loading the trailer, and I rewarded him.  Astonished by his ability to understand, I just seemed to start falling head over heels for him even more. They say a horse can’t understand you and not to waste your breath, but I beg to differ. I love Sid and he understands everything I say and do. He is better than any horse I had ever had and I thought that was just how he was with everyone… so I decided to let my sisters see what they could do with him. Sure enough I was wrong , that love I had for him was the same love he had for me. When the girls would ask him to do things, he was alright, but he just wasn’t the same for them as he was for me. I was happy to know he loved me as much as I loved him.

Over the summer, he was still too small to ride so every day I went over everything we learned then I added something each time. First I would groom him, and then we would work for exactly 15 minutes on the longe line, after that I would try a new piece of tack on him, when I finished that we would start learning new things. Every other day instead of trying on more tack we would work on desensitization. Soon I had him able to wear a blanket, a saddle, a girth, a breast collar, and a bridle. He was also completely desensitized to pooches, rain slickers, Wal-Mart bags, paper sacks, bubbles (surprisingly scared him at first), and anything else you could think to try. After that summer he became the best horse I could have ever wished for. Then one day after going to the vet and getting the ok to start him under saddle, I got on his back. After about 30 minutes of riding he was able to walk, trot, extended trot, lope, and back up. (I think mostly because he already knew it on the ground.) 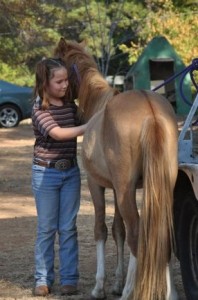 Now, after being under saddle for a couple of months, I could never have asked for a better horse. He may not be the fastest, but he has a heart of gold. The one only time I ever fell off him (because I lost my balance when we were running) he came and stood right next to me, and let me grab his neck to help myself up. Then he followed me with his head down all the way to the house, even though I wasn’t leading him. After that I went in the house to clean the dirt off of my clothing, he stayed right where I left him and called the whole time I was gone. He was happy when I came back and got back on him. I don’t know if that means anything to anyone else, but it sure as heck shows me he is an amazing horse, because it was not even his fault that I fell, but he was still worried about me. Now, whenever I try to make him go fast, he will not do it if I’m not balanced correctly. 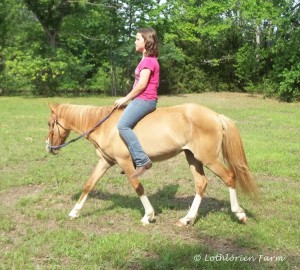 Overall, I think that Dance Inside the Sun is the most amazing horse I have ever had. Hopefully one day everyone who is searching for their perfect match will find one just as good as mine with my little Sidney. I love him more than anything and I don’t know how I would live without him. Thank you for reading our story and if you love Sid as much as me you can follow him on facebook under “Dance Inside The Sun”.