Getting to Know the Horses of the AIHR – Wanna Fly 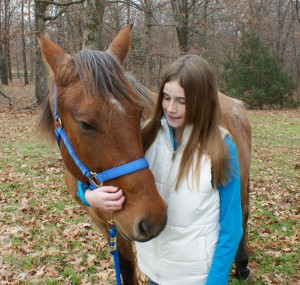 When I met Fly, I knew I loved this horse. Of course I love all horses, but Fly was different. I felt we had something special between us, and I never wanted that to change.

The first time I rode Fly, I immediately noticed his amazingly smooth walk and trot. About a couple months later, I went to my second show, and I rode Fly, and it was his first show. He behaved so well. He never thought of acting a fool, and was perfect. We placed pretty darn good for my second show, and his first! We got 4th, 5th, and 6th, for different competitions.

Then I moved to Northwest Arkansas with my parents, and thought I would never see Fly again. I ended up visiting Texas again on Labor day weekend, and I went on a trail ride, but I didn’t know who I was riding. When we got to Karma Farms, I saw Vickie with a horse that looked like Fly, but I didn’t say anything because I didn’t want to sound stupid. My mom asked Vickie if it was Fly, and it was! I was so happy. On the trail ride I had a blast and I wish it could have lasted even longer.

After the ride in Texas I came back to Arkansas and started taking lessons in Dressage. After I rode Fly onLabor day weekend, I posted on Facebook about wanting to get a horse of my own. Laura, Fly’s owner, mentioned calling her about Fly. That night I begged my parents to call her. Then they told me to go upstairs and they talked and told me that I was most likely getting Fly. 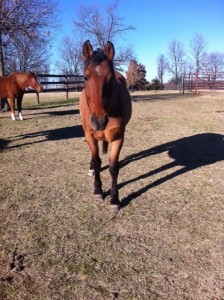 A month later, we went back to Texas and picked up Fly. I was so happy, and glad it worked out! On the ride home, which was six hours, I made my parents stop and I checked on Fly every forty minutes. When we arrived at the place I took Dressage lessons, and also boarded horses, we took Fly to a paddock and I walked him around and let him graze on the green grass, and let him munch on some hay.

A week later, I started riding Fly at Manuel Farm. After we got a lot of practice and lessons, we went into the arena and rode, and got a break from the round pen. We started trotting and cantering.

After a month of being at Manuel, we went on our first trail ride and we both really enjoyed it. Then we started going on road rides, which was on a quiet dirt road.

Now, about five months later, we have been working hard, and started Dressage in English tack! Even though Fly is a trail horse by trade, he is doing wonderful in Dressage!

I honestly don’t know what I would do without Fly right now, we have taught each other so much, and gone through many things, but have always managed to stay together, and now forever!