I raised my Appaloosa mare, Scarlet Nation, from a foal.  She had been born a solid colored filly in a world that only wanted spots.  I got her as a three month old and about the size and color of a large Irish Setter, hence her name.  In her youth she was a sparky devil, spooking and whirling, playing and bucking.  She was never mean about it, just high spirited.  Together, we did trail riding and competitive endurance riding both of which take a lot of time in the saddle.  As she grew and matured we bonded and tested each other daily.

At the time I was active duty Air Force and July 4, 1991 I left to serve in Desert Storm.  I spent over three months as the Chief Dispatcher in Vehicle Operations in Dhahran, Saudi Arabia.  While we were definitely a rear line unit, we supported the brave fighters that lived in the tents and the tanks.  I saw no action except in the vehicle yard and behind my desk.

However, part of my job was to inspect vehicles that came back from the desert.  No one knew what they had been exposed to as we had no way of testing them. Then, of course, there was the oil well smoke that blew in daily from Kuwait in the north.  It came down on us like pea soup.  There were days that the men couldn’t see to drive to do their jobs.  It was insidious, grey, oily and we breathed it constantly.  And the omnipresent desert sand was everywhere.  We drank it in our water, we ate it in our food and we wore it with our clothes.  It got into every crevice and orifice of our bodies.

When I finally returned from Saudi in October of 91, I seemed fine for several months.  Then the following fall, there seemed to be a virus going through the veterans of the conflict.  I was diagnosed in August with pneumonia.  That seemed to be ‘the moment’ my life changed.  Later, I decided to take the early out in the drawdown of 1994. I left the military with a small disability for sinusitis, but I still felt pretty good overall. 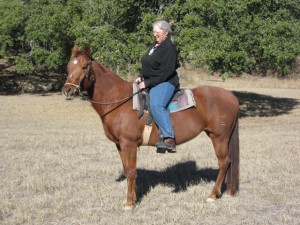 This put me back into the civilian work force in my mid forties still making me a viable commodity.   I took a job with a small city as a police dispatcher.  My second year there I was exposed to pepper spray and developed a case of sinus and inner ear problems.  I went to a civilian doctor who asked me how long I’d had asthma.

Needless to say, I was shocked.  I’d always been very healthy and active and had never been diagnosed in the military.  This was new.  I gave him copies of my military health records and he was able to pinpoint its development.  During the last 14 years, I’ve been hospitalized many times with bronchitis, pneumonia, and acute asthma attacks.  Once, I stopped breathing in the ambulance and awoke 28 hours later in the Emergency Room.

When I returned to civilian life I had been looking forward to trail riding and competing in Endurance Racing on Scarlet.  We had done a few rides in the twenty five mile distance category and had begun to finish successfully when the diagnosis was given.  But after a while, the asthma began to take its toll on me.  Needless to say, my health issues wadded up my dreams of competition and threw them in the trash heap.

Through the initial diagnosis and early treatments, I had two different doctors recommend that I sell my horse and get rid of my dogs even though I had not tested allergic to either of them.  They predicted that my animals would make my breathing ailments worse.  Only my primary care physician, a sport medicine specialist, supported me here.  He said that my dogs and my horse were too important to me.  And regarding my horse and my riding, however little I did, she would be my main impetus I would have to stay active.  As far as he was concerned, if I sold my horse, I’d only regret it.   My husband agreed with him.  He said that he knew that Scarlet wasn’t going anywhere, except maybe to an early retirement.

As my physical problems worsened, I went several years where there were days that I could barely drag myself to the barn to feed and care for Scarlet.  We hardly ever rode out on the big trails anymore.  Sometimes, I would just take her for a walk on a lead, some days I could only groom her.  I’d gained a lot of weight due to medications, lost a lot of muscle mass and my balance was gone.  When I did manage to get in the saddle it was to poke around the arena and immediate area.

I also began to notice that Scarlet was changing too.  She was becoming steadier, kinder and had quit all her kittenish tricks.  It was as if she knew that I was not well and she went out of her way to be gentle.  She was always careful of me and easy to ride.  She would stand patiently at the mounting block for as long as it took me and stop whatever we were doing when I had a coughing fit. 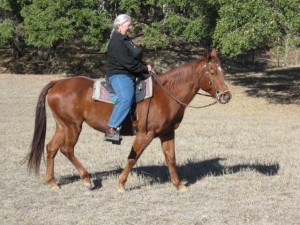 One memorable day sticks in my mind.  I hadn’t felt well for several days but it was a fine spring morning and I was bound and determined to get out into the sunshine.  I saddled Scarlet and we took off at a quiet walk down the local trail towards a park area.  As we traveled, a large dog appeared on the way and began to try to chase us.  He’d bark and run at her legs and even tried to nip her.

I was upset and scared that she would spook and bolt away from him.  I was afraid that I would become unseated and fall during the attack leaving me to be bitten or at the very least, injured by the fall.  But Scarlet refused to panic.  She laid her ears back at the dog, kicked out and made little charges at him, finally intimidating him into abandoning his attack on us.

After he left, we turned back towards the barn.  The stress and fear of the attack quickly turned a slight sinus pressure headache into a full blown migraine and imminent asthma attack.  I was not far from passing out and falling out of the saddle completely.  When we finally got back to the barn I was barely able to unsaddle her and put her in her paddock.  I managed to drive the short distance to my home and help myself past the asthma attack.

After a long hot shower, proper medications and a nap I recovered enough to go back out to the barn to check on my horse and give her the evening meal.  One of my friends was at the barn tending her horse also.  She approached me and asked what had happened that morning since Scarlet was lame and obviously had not been tended properly.

When I explained about the dog attack, she went with me up to my mare’s pen.  There she showed me a small puncture wound on my horse’s fetlock.  I believe that the dog had actually bitten her at some point but Scarlet had stood her ground, refusing to panic and run away with me.  She not only remained calm under the pressure of the attack by a large dog, but she had successfully defended us, and then made sure that she returned her incapacitated rider to safety.

This is only once of many times where, when faced with bad situations, my horse has shown not only extreme good sense but has taken responsibility for my welfare.  The only ‘bad’ thing that she does is when in a crowd of other horses she will lay back her ears and make aggressive motions.  When another horse reached out to touch her with his nose, she actually kicked him.  Once, while at a seminar, I spoke to a trainer about her ‘bad’ actions.  After listening to my story and questioning me further, he explained that my mare had taken a protective posture for me.  He said when and if I regained my health I could take the dominant role back from her slowly.  But he also emphasized that I should remember WHY she’d done it…for my welfare.

I am now fifty eight years old.  Scarlet is twenty two. That is not an outlandishly old age for either of us by any means but certainly one of maturity and wisdom.  She has not only recognized that I am disabled and that I depend upon her to act well while I’m riding but she has gone a step farther.  Scarlet has taken it upon herself to insure that I am kept safe by her intelligence and sensitivity to my needs.

Oh, we still have our fun hours too.  She still plays and spooks a little when we’re both feeling good and a fresh 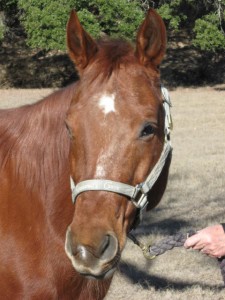 breeze is blowing.  And I’m hoping that with some new medications that are helping stabilize my condition that we can once again venture out to more distant trails and new adventures.  I know that she will enjoy seeing new surroundings as much as I will.

But I know that my Scarlet is more than just a pet, or a working animal.  She is my partner.  She has allowed me to continue to enjoy a way of life that most people at my age and situation would have given up.  Her happy whinny and soft careful touches at my arrival in the mornings and evenings continuously encourage me to keep on trying and pushing my limits.  She allows me the freedom to continue to continue to fulfill my love of the outdoors and experience nature’s beauty.  Her consideration of my physical frailty has allowed me to stay active and alive.  She is my angel horse.