My brother, Scott, was the first to meet Angel on the high plains of Northeastern Wyoming in late May of 2004. If not for their first encounter, I would have missed out on the joy and pleasure of knowing her today. Scott and my parents were on their dream vacation visiting the Cayuse Ranch and getting to know Emmett and Josie Brislawn. The Brislawn family is dedicated to preserving Spanish Mustangs, also known as the Original Indian Horse. During this trip they were able to traverse the Cayuse Ranch land and were tossing out alfalfa cubes from back of Emmett’s truck, taking in the sight of free roaming Spanish Mustang herds. Not really intending to purchase a horse, they fell in love with Angel. Who could blame them. Angel was only a few days old and came right up to Scott putting her head in his hands. He was taken by her big angel eyes and curious spirit. She was the only filly brave enough to be touched and her one blue eye was captivating. They did not see her again until almost a year later when she was shipped all the way from Wyoming to her new home in Texas. 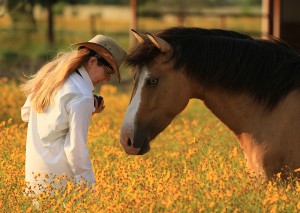 Angel had almost a whole year of running free in the grasslands of Wyoming so when she arrived home she stayed in a round pen while adjusting to Texas and meeting her new pasture mates. I’m sure it was a world of change for her, running free in the wide open range and then the confinement of a pen. It took my parents a week to get the halter off that had come with her, but they spent everyday in their lawn chairs just hanging out with her for hours at a time in the round pen. She soon warmed up to my family and to life as a Texas gal. She so enjoyed being scratched and loved on, and my dad knew just where to scratch her. They spent a great deal of time loving on her, getting her to accept handling and the human touch.

Now I was hoping to borrow a mare from my family to be a companion for Sunny (Sundance Kid) as they had three mares at the time who all needed training. So I also offered to provide some training for the mare I borrowed. They said pick and of course I could not resist those angel eyes. She was almost three when returning home with me. She turned out to be a great companion for Sunny, they are like two peas in a pod. She was also a joy to train under saddle, everything came so easy for her. I really took my time with her, as this was only the second horse for me to train. I had no round pen or arena for this task either. She started on the lunge line, ponying, driving, and then I was riding her. She accepted the saddle and then me with no objections. She did not have a bit in her mouth for the first year as she did great in just a side pull. She was a breeze, not because of my amazing skills (if you can’t tell I’m being sarcastic) but because of her easy nature, curiosity, fearlessness, and all the time my parents spent gentling her to human touch.

Angel is one of the most curious horses I’ve ever known. If anyone is out in the pasture doing anything she must go see what is happening and she is sure to stick her nose in it. Which is normally enjoyable, except maybe when Chris is working with a chainsaw. While Sunny is running off from the monstrous blue wheel barrow, she is chasing it down. The first time she saw a small herd of white cattle at McKinny Rough trails in the Colorado river, she was plain frustrated that I did not allow her to go swimming down the river to check them out. I did quite a bit of work desensitizing her and preparing her for trail obstacles. Needless to say this was not an overly difficult job, and she caught on fast. Not only did she make a great companion for Sunny, she was also a great companion and friend to me. My parents easily observed this connection and generously allowed this borrowed horse to become a permanent part of my life.

Angel has excelled in trail riding and obstacles. She was awarded the 2008-2009 American Competitive Trail Horse Association (ACTHA) 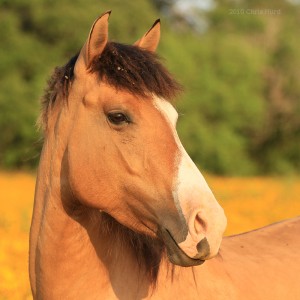 Pleasure Division Reserve Champion, we completed a one day 20 mile novice NATRC ride, did very well in our first AIHR show in 2009, and she earned AIHR Hall of Fame in 2010. She like Sunny, has also made a great AIHR model by representing the breed in the book The Official Horse Breeds Standards Guide on page 19 and page 23 (thanks Chris for capturing such fabulous images) and at the 2008 Bluebonnet Horse Expo in the parade of breeds. She continues to be my trail riding partner and is now assisting me in the exploration of as many different trails as possible for my Where The Trails Are (http://wherethetrailsare.com/) endeavor. Maybe we will see you on the trail.

Angel is double registered AIHR-O /SMR and I plan to also register with HOA. She was born on May 21st, 2004 bred by the Brislawn family. Her sir is Kid’s Reflection and dam Sirbees Navie, and my mother gave her the name Reflections Angel. Which is very fitting with her beautiful big “angel eyes”.

Again, I must thank Scott for discovering Angel and my parents for being so generous. I’m also thankful to have Angel as my equine friend.