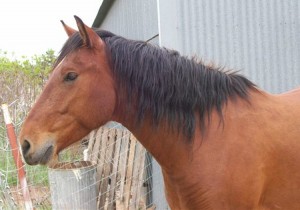 Spirit was 5 months old approx when he came with his mother and 133 other horses from the Navajo reservation.  They travelled in cattle trucks to Hennessey OK, where he and the others were put on scrub land and allowed to fend for themselves.

Out of the 135 horses 35 died, including Spirit’s mother.  We found him just barely hanging on still attached to her udder and the vet said that she had been dead about 2 weeks.  This was in November of 2002.

He and 6 other horses were taken to a vet’s farm and the others went to a deputy sherrif’s land near Hinton.

I helped take care of the ones at the vet when he and the others were taken there.  To begin with he wanted to kill any human that came anywhere close to him, can’t blame him.  He was terrified of nylon jackets, so I gave him one and he tore it into little pieces.  It took a lot of patience and trust from both of us to let me get close enough to him to let him know I was not going to hurt him intentionally.  He was gelded on the farm and had all his shots.

About a year later Spirit and I became family.  I moved him to a place that I rented, and within 3 days Spirit had laminits which inevitably went to full founder of both his front feet.  The vet and I went through all the normal things, was it the feed?  No.  Was it the hay?  No.  Eventually after talking to different vets and schools we found out that Spirit founders on STRESS.  He lived in this place with 3 friends a paint mini horse, a female donkey who took care of the mini and a son of one of the starving horses. 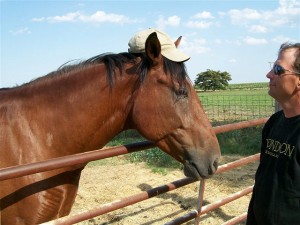 During this time Spirit, being Spirit colicked 3 times.  The last time I told him, if he had had enough just to go, I would miss him and understand.  To my horror, he had the unmitigated cheek to stop breathing.  It seemed like hours, but his pasture buddy came and bit him on the bottom, Spirit gasp and stood up just as the vet came in.  Whew!!

We were there for about a year when my Mother died.  I did not know that she and Daddy had put money away for me to have a farm of my own. So we moved.  Spirit, Miss Mable – donkey, Patches – mini, and Denny the other horse.  I was terrified that the move would stress him and the founder would get worse.  He did very well and seemed to be happy in the 40 acres that he could roam around at will.

Spirit is afraid of the dark, so there is a night light in the barn and he is also claustrophobic, so there aren’t any stalls in the barn – it is open and airy.

Once down here, with Spirit still not feeling well, I got rid of Denny as he was too rough, and it was causing problems.  My farrier worked with me weekly padding, trimming and anything else he could come up with to help Spirit.  Eventually I gave up – Spirit didn’t.  He plodded along in pain, not about to give up at all.  So I put my thinking had on and clicked on Barbaro on the internet, found a vet up at Penn State and wrote to him about Spirit.  He emailed me back and told me that we needed xrays for his legs to see what was going on.  Ha!  Now find a vet who will come out and do it in the barn – Spirit couldn’t travel.  Eventually I found one and he came, took the pictures and sent them to Penn State.  The diagnosis was severe founder with some bone loss.  Now the farrier and I had to get Spirit to stand still whilst we drew his feet.  That was a laugh try to get him to stand still on poster board.  The farrier is a quick artist and after a lot of treats and ‘I love you’ to Spirit, he did it. 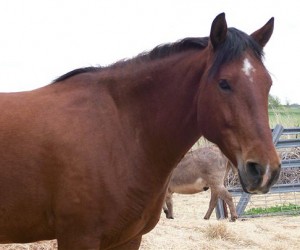 Now the only thing that could help Spirit was a deep digital flexor tenotomy.  Reading up on it didn’t make me very happy as they kept saying that the horses didn’t last very long.  Talking to the vet, he said that those were very sick horses and this was the last resort.  Luckily Spirit was healthy.  What I didn’t know is that they had only given him a 25% chance to make it – no one told me!

The surgery was done in the barn with both vet and farrier working on his feet, a very sleepy horse got to his feet and the look in his eyes was ‘Wow’  this feels great.  He has come a long way from that surgery 3 years ago.  He has arthritis in his hips from using his back end for support when his front feet hurt so much.  He is on supplements for joint problems and he has days when he hurts.  I nearly lost him this past summer as he cannot tolerate heat.  But my buddy again, would not give up and we worked through it.  The first cool day he was prancing around making up for doing very little in the summer.

Patches died a year ago, he was still a baby and I panicked thinking the stress would start another founder attack.  The big horse took it in his stride.  He still has Miss Mable, and Eyore a mini donkey, Mouse a mini horse and PeeWee a micro mini horse.  So he thinks he is the only big horse in the whole wide world!  He now loves everyone that comes, well almost everyone.  He like the others can never be ridden, they are all rescues with something wrong with them, but he is my friend, my confident, my soul mate and the best buddy one could ask for.

Spirit is 9 years old.  He made it even though the vet didn’t give him much of a chance.  He is as stubborn as his mother and has a mind of his own.  He and his friends have the run of the field and barn, and a small shed which we call the sweat lodge.