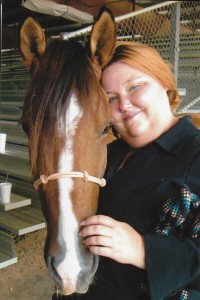 Alicia Sims and her friend, Blaze.

I guess this story starts with trying to find my dream horse… the horse I have always wanted. My husband and I had already been very impressed with the Colonial Spanish Horses, so much so that we sold all but one of our Arabians, so I knew the first logical step was to visit Karma Farms and find the horse of my dreams.

I spoke to Vickie Ives about coming out and meeting the colts and we set up an appointment. I was so very excited that I could barely contain myself. I knew just what I wanted… Rowdy Yates (hahaha), BUT since that would not happen and I knew it, I set my mind to go out and find a friendly, but flashy colt with impeccable conformation and Rowdy Yates in his pedigree. (I didn’t want much… just perfection.) Oh and to make my task greater, I needed all of these things in a colt that no one would get mad if I gelded, because I have never had any intention of owning a stallion. The day rolled around and it was finally time to go out and meet the colts. It didn’t take long to see that the choice was not going to be an easy one. Jack Sparrow… I was in love with him, but knew he would need to remain a stallion so that knocked him right off the list. Hey Jude was a definite cutie, but was standoffish and very small for such a heavy person. Blazing Guns… he was a sweet boy and surely made you think twice about him because he was sooo sweet and longed for the attention, but I knew the chance of him being gaited was high (I knew nothing about gaited horses),  and he just wasn’t flashy… actually he was at that adolescent age, every horse goes through it… you know the “ugly duckling” stage….

Then I found him. My perfect colt – Stray Cat Strut, very flashy, great conformation and YEP…. Rowdy’s son! I was enamored with this colt. He was everything I wanted!!! Yeah he was pushy and not very good with people, but I could overcome that, I thought. We did really well, Strutter was 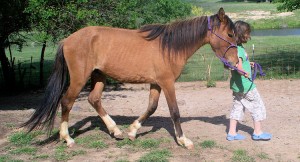 coming along nicely with one big hitch… he only liked me. He didn’t like for anyone else to mess with him or to even come into his pen. Well, being a mother of 3 girls, it didn’t take long before I was calling Vik for advice. Even before making the call I knew that the right thing for a mom with a family was to have a FAMILY horse and I was being selfish by keeping a colt that they couldn’t work with too. After talking to Vik, the decision was made to take Strutter back and get a different colt. I was Heartbroken…

We got to Karma Farms to drop Strutter off and I was just going to go back home and think on things for a while, but my husband wanted me to decide that day to avoid another long trip over there. I walked through the pastures again and well… no one else was Strutter. I just didn’t want another colt, I wanted him. To make matters worse I felt like the worst mom EVER for being so selfish. I decided that I was going to choose between Unwritten and Dr.Pepper, both VERY Nice colts and I knew it but neither one related to Rowdy. As I was trying to decide I had an idea… My husband loved Blazing Guns, so I would just choose him and he could be Rick’s horse. Locomotion was my second favorite stallion at Karma and this was his son, the temperament on him left no doubt. I went out and caught him and brought him up and even after not being handled much in a good while he was friendly to everyone in my family. Yep, that was the responsible choice. 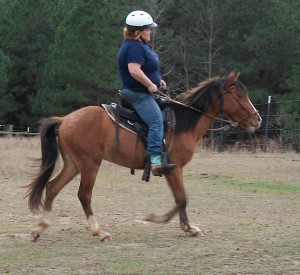 We brought Blaze home and though I swore he was Rick’s horse, Rick said he wouldn’t even touch him until I at least tried to get to know him. I didn’t even want to. I was being selfish and unfair to this poor colt and I knew it but I still had a hole in my heart where my dream colt had been. A funny thing happened, Blaze cut his lip… kinda bad and it had to be cleaned doctored regularly. He wouldn’t let anyone but me clean it or doctor it. He would let anyone in the family lead him or work with him, but he wouldn’t let them near that injury… so I was stuck with the responsibility. It was a very good thing. He relied on me and though I didn’t want another horse to fill that hole, I needed one. Things began changing slowly from that point on, he would work for everyone, but would work just a hair bit better for me. Time for another milestone came and it was time to start giving his feet. It took a long time even for me to get him to give his feet, but then he would give them to me and no one else. I was exasperated with this colt, but secretly a little proud that he would do things for me that he wouldn’t do for anyone else. He made me feel special. Blaze grew on me more and more over the next few months and I told my husband that I thought I might just keep this one after all, because though he was not what I wanted, he was what I needed. I worked with him daily to hopefully make him into the horse that I needed him to be. I didn’t realize it at the time but I was growing closer to him all the while, and one day I realized that I did finally Love this horse. He was patient with me when I needed it and pushed me when I needed that.

One day in late August, I had a most terrible morning. It was the day that we put our dear old Arabian mare Badancja down. She was 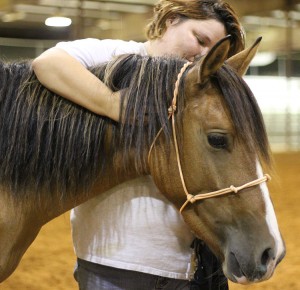 suffering from degenerative joint disease and could barely walk. I took her out and loved on her for the last time and said goodbye. It was one of the hardest things I have ever done and one of the worst days I have had in a while. I left there, stopping several times on the way home to cry. I just wanted to go bury myself in the covers and hide for the rest of the day, but I had to stop by and feed Blaze first. I got there to feed him and, as usual, he had thrown his feed bucket out into the middle of the pen. I let out a heavy sigh and went out into the pen to get the bucket. “Couldn’t he make things easy, just this once”, I thought. While I was out there he began to nudge me in the back, he frequently does this if I am not paying attention to him. I was not in the mood so I just ignored him. He pushed again and something hit me in the back. I turned to find Blaze standing there with a very sad look in his eye and holding his halter and lead rope in his mouth. “Ok, ok”, I thought, “I know you need some exercise.” So I wrapped my arm under that big head of his to put on the halter and I felt the full weight of his head on my shoulder. I just started crying uncontrollably I couldn’t hold it in any more. All the while I sobbed he nickered softly to me. I just buried my face in that thick mustang mane and cried some more. When I was finally able to stop crying, I gave that horse the biggest hug I ever had. We put on his halter and the longe line and worked for a bit. I knew that I loved Blaze before that day, but that was the day that I figured out I couldn’t live without him.

A few months now have passed since that day and it seems as if my love for that horse has grown by leaps and bounds each day since then. He is my pride and joy… my heart. Funny enough… during all that time he was growing up into quite a handsome horse. I look at him now and can’t imagine how I ever passed him up that first day, or how I could have been so in love with a horse I barely knew, when it took me so long to love Blaze. Then one day I realized that, though I did love Strutter (and still do), I wasn’t heartbroken over that horse, but over the idea of losing my dream horse. Funny thing, that… the idea of a dream horse. I know all people have it, until they find their Actual dream horse or it finds them. I have since found out from talking to more experienced friends that often your dream horse looks nothing like you ever thought it would on the outside, but inside has the heart you can’t live without! I guess it is part of growing up, really, though you would think that by now I would surely have done all the growing up I needed to.

That is the story of how my dream horse found me! 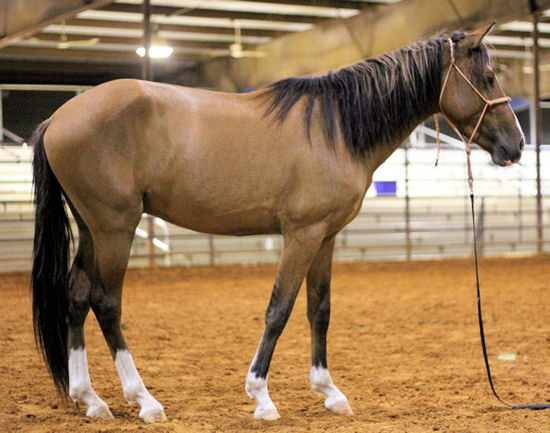